Murugaram Jayabhrathi - Blog - A crucible to discuss and arrive at ideas for better world - Welcome!

Murugaram Jayabharathi - Blog - A crucible to discuss and arrive at ideas for shaping better individuals, family, society and world - Welcome! Unemployment Forces PhDs To Apply For Posts Of Peons

For 368 positions for peons at the Vidhan Sabha Sachivalay or state assembly in Lucknow, more than 23 lakh people have applied. Of them, 255 have doctorates in engineering, commerce and science and around 25,000 have master's degrees.

The UP government has received 23 lakh people for 368 positions for peons at the Vidhan Sabha Sachivalay or state assembly in Lucknow. Of them, 255 have doctorates in engineering, commerce and science and around 25,000 have master’s degrees.

Prabhat Mittal, secretary, said, candidates applied online against the advertised posts. “We were shocked to see the response,” said Mittal.

What is more appalling is that two lakh applicants are at least armed with BTech, BSc, MSc and MCom degrees. Around 255 applicants have a PhD degree in hand.

All that the government wants in a peon is school education and bicycle-riding skills. Not even a written exam is needed.

To understand how best to tackle the deluge of applications for the post, the government is consulting experts. If so many candidates are to be interviewed, the selection process could take four years, say officials.

Applicants like Alok believe it is worth the wait; a peon’s job means a salary of at least Rs16,000 and all the benefits that come with being on the government’s payroll.

Officials believe soon, the staff sitting on benches outside government offices, waiting to deliver files or fetch water, could be those with doctorates in history, philosophy or psychology.

“It is possible after getting the job, these candidates might feel frustrated and other officials might hesitate in giving them orders,” said UP backward classes welfare minister Ambika Chaudhari.

Candidates have their reason for applying. “It’s better to work as a peon than to roam without a job,” said Alok, an applicant who holds a PhD degree. Graduate Ratan Yadav added, “there is nothing wrong in taking up menial work.” 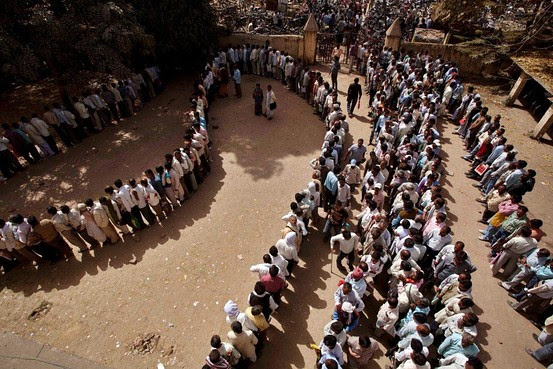 "Only  60.5  per cent  of persons aged 15 years and above  who were available for work for all  the 12 months during the reference  period were able to get work throughout the year at All India level.  In rural and urban sector, it was 53.2 per cent and 78.5 per cent respectively."

Indian youth need to create their own jobs!! There are lot of scope in manufacturing and service provisions.

Ex: Organic long term food crops and products🍚, instead of factory manufactured biscuits and chocolate🍭, home made delicacies with few days shelf life, handlooms, handicrafts, cold pressed oil instead of factory refined oil, village tourism, baby sitting & household works to help working women and aged, coconuts instead of colas, hand grained atta/idli batter/chutneys instead of instants, cycle rickshaws instead of cars, more repairman instead of use and throw products, labour intensive local resources based dwellings..............but for this to flourish we need to create demand⏫ for it.............all this above may remind you of the great weapon of our freedom movement "charka"☺ Let our thoughts reveal keys to the problems of the day🙏🌍 Murugaram Jayabharathi
Posted by Murugaram at 9/17/2015 11:28:00 am